The vets says: “MLS® is effective and totally safe: no risks of burning”!

“When I started using it in France, MLS® Laser Therapy was completely unknown and animal owners were a little sceptic if I proposed it. Today, thanks to the results obtained in treating different pathologies and the grapevine which started around it, those same owners are now asking to use it on their pets”.

Dr. Roberta Burdisso (physiotherapist, movement educator and Head of the physiotherapy service at the Centre Hospitalier Vétérinaire Fregis in Arcueil, France) told us about this change two and a half years after starting to use MLS®. It was a motivated choice, above all because of the safety of the therapy. “An important factor,” says Dr. Burdisso, “that separates MLS® from the other lasers. With ASALaser therapy there is no risk of superficial or in-depth burning like periostitis, something that can instead occur with other types of laser”.

Q. In addition to safety, what other factors convinced you to use MLS® in your daily practice?
A. Its effectiveness in treating many pathologies. I refer, for example, to articular problems such as osteoarthrosis in dogs, and osteochondrodysplasia in cats, the Scottish Fold breed in particular. The therapy showed how valuable it was even for treating pain and fibrosis after femur head resection, surgery on the front cruciate ligament, in elbow dysplasia and sprains. Without forgetting contractures, pulled muscles or partial rupture of the Achilles tendon, all of which MLS® helps to solve. I finally verified that its effectiveness is evident even for cicatrizing eschars and wounds.

Q. What effects does the therapy have on treated animals?
A. I’ll give you a true neurological example: all dogs treated with MLS® combined with hydrotherapy walked in shorter times than those that were only treated with water therapy.

Q. I believe that your example expresses more than a thousand words…is there another story among your cases that factually explains the benefits of MLS®?
A. There are certainly more than two or three cases in which MLS® Laser Therapy has been determinant.
A good example is a Scottish/Highland Fold breed of cat suffering from osteochondrodysplasia, a genetic illness that creates problems for the cartilage of the tarsal and carpal articulations in the elbow, knee, hip and backbone. The cat, which was one year old, was suffering from severe spinal pain, which prevented it from jumping and caused lameness, above all in the front limbs. After being treated with anti-inflammatories for 6 months without any result, we thought about applying MLS®. After 8/10 sessions, the cat’s problems were solved. It still receives therapy once a month, and has no pain or lameness of any type.

Q. An excellent result!
A. The objective was reached also with a 10-year-old Labrador that had been hospitalised for tetraparesis and receiving cortisone for more than 30 days in the same clinic where it was being treated. When I visited it for the first time, it was in a severe stage of tetraparesis and amyotrophy. What did I prescribe? One session of MLS® every day for a week on the hip, knee, elbow and lumbosacral spine joints, and after that three sittings each week for a total of 15 days. Today the dog is walking normally on all 4 legs and continues with therapy twice a month as maintenance.

Q. In cases like  this, how do the owners act?
A. In this specific case the owner couldn’t believe it. “It’s a miracle,” he said to me, “because I thought it was too late: I can’t believe that my dog has recovered!”. But MLS® has truly helped in lots of other cases.

Q. Please tell us…
A. A cat wounded by barbed wire, which had been taken to a vet clinic where a suture was applied but didn’t hold. The cat wasn’t able to heal. When I saw it for the first time, 10 cm of the 15 cm wound was infected and euthanasia had been proposed to the owner. I treated the cat with MLS® continually for 10 days and alternately for another 12/14 days. The wound closed completely and the cat went home.

Q. So the risk of euthanasia was avoided...
A. It’s not the first time. There was another case of a 13-year-old German shepherd that had been operated for four hernia discs, eschars and pyoderma. Euthanasia seemed to be its destiny. Thankfully, the owner sought me out and explained the relationship he had with his dog, his only companion. We had to save it. I started off working on the eschars, then the pyoderma and then on its backbone with Laser therapy sessions on alternate days for a period of 15/20 days. Today, one year later, the dog is still living in a dignified way with its owner.

Q. Guaranteeing that the patient recovers its wellbeing and quality of life is not a secondary matter…
A. It’s fundamental!  Just think about those cats that can no longer eat independently because they have gingivostomatitis. Even in this case MLS® is extremely valid. I can say this after having treated around thirty cats with gingivitis: laser therapy, effective against inflammation and pain, allows some of them to start eating independently again.

Q. Does treatment make the animals suffer?
A. Absolutely not. The therapy is painless and does not have any side effects. Many of the animals show that they appreciate the treatment…

Q. Now for the application part: could you give us your personal opinion of the Mphi vet device?
A. Top marks: it’s very practical, light and easy to transport everywhere. Even the handpiece makes applications easier… the sessions are also very quick.

Q. You decided to use Mphi Vet Orange in addition to Mphi Vet: could you make a comparison?
A. I have been using Mphi Vet Orange for a month, still not enough time to evaluate it completely, but I can already confirm that the sessions are much quicker.

Q. As someone who uses MLS® often, do you feel that any improvements could be made?
A. Personally, I’m happy with it as it is and I couldn’t imagine any other improvement…comfort, possibly: the carry bag should maybe have wheels.

Q. Ritual question: is MLS® also “effective” for therapists?
A. Undoubtedly! Thanks to MLS® therapy I have added to my expertise. 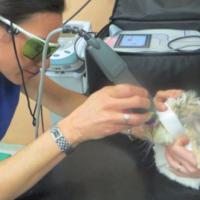 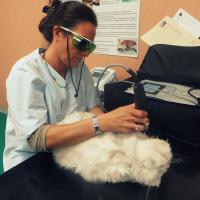